The towable boom lift is often referred to as a cherry picker, man lift, basket crane, hydra-ladder, towable aerial lift, and towable lift. It is a common type of aerial work platform that features either a flat platform or an open bucket at the end of a hydraulic arm. The boom lift makes the unreachable reachable and provides an access to the inaccessible. Because of its mobility, DIY users and contractors alike favor boom lifts for all kinds of odd tasks when ladders just won’t do. 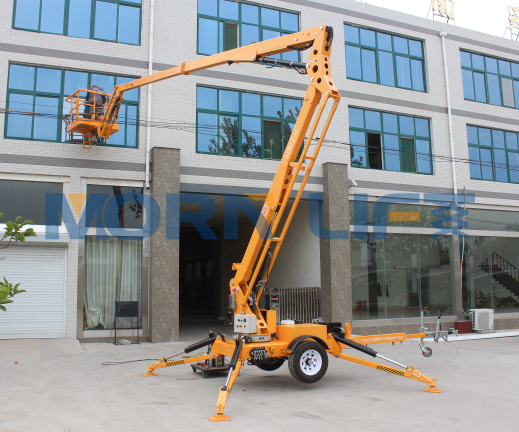 But what makes the towable aerial lift different from other types of aerial lifts? The fact that it is simply towed behind a truck. At MORN, Our towable lifts can be towed easily behind vehicles with trailer hitches! These are perfect for those that do not have a flatbed trailer to haul it around. Workers can shift the jobsite flexibly from one to another.

In addition, towable boom lifts feature an open bucket in most cases that can be easily worked from. This removes the need for the worker to get out of the machine, which is much safer. Also there is little to no risk for the operator to get an electric shock when working on power lines, because the lift is insulated from electricity due to the rubber tires. The operator in these lifts typically have their own set of controls. So, getting into just the right location to work comfortably is efficient and easy. 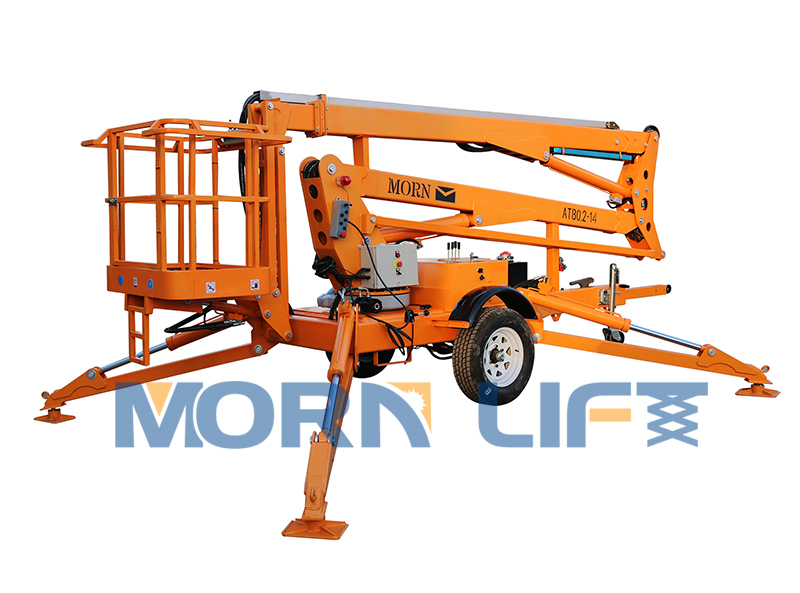 Even though the trailing boom lift was originally used for picking fruits in orchards (thus the name cherry picker) it is now used for a wide variety of applications. Most commonly, they can be found on the side of the street where they are used to work on telephone, cable and power lines. When communities put up holiday decorations they will often use a towable lift as well. Some fire stations even use towable boom lifts instead of a simple ladder! They can even be used to clean windows! These lifts can also be used in indoor sites, such as halls, hotels and libraries. The compact body structure makes the lift work within confined spaces.

If you are interested in purchasing a towable lift, you have come to the right place! Our lift engineers who have more than a decade of industrial experience will design the most suitable boom lift based on your requirements. Custom service is also available in terms of power type, platform size and other optional configurations.

How to Operate Cherry Pickers Safely for aerial works

MORN LIFT Mobile Loading Dock Ramp: Why Supporting Legs Have to be Retracted When Being in Use?

How to Care for Your Loading Dock Ramp in Bad Weather?

How to Install a Stationary Dock Ramp for Containers?

MORN LIFT Got Great Achievements from the Big 5 Heavy 2018